Hi all, I hope everyone is by now prepared for Christmas! Between work and college, I have been hectic and haven’t had a chance to enjoy the festive season so far. One thing I find helpful when I’m busy is to give my mind a break and delve into some interesting stories for a few minutes. So, with that in mind and taking a side-line from murders or disappearances, I want to share an interesting story with you. The actual ‘happening’ is short in itself but the mythology, science and speculation it sparks brings up a lot of fun thoughts. And who am I to say no to mysteries and science…

The vanishing Island at Ballycotton

Ballycotton is a fishing village in Co. Cork. This coastal village overlooks Ballycotton Bay and has a sandy beach which stretches out for about 25 kilometres (16 miles for those not on the metric system). Interestingly, due to severe coastal erosion, metres of land crumble away into the sea every few years and due to this, Ballycotton is actually a re-settlement of an older village which is now long underwater.

On the 07th of July 1878 residents witnessed an unbelievable sight.

A new Island suddenly appeared just off the coast and could been seen by people who were now starting to gather along the shore. It was said that it could not have been a sea monster or whale as the view was so clear that witness claimed to be able to see a coastline, woodlands, mountains and valleys on this mysterious new island. Fishermen ventured out on their boats with aims to explore the island, but it faded into thin air upon their approach. The island has not been seen since.

Other coastal areas such as Ballyheigue Strand, Carrigaholt, and Ballyinalearne Bay have also reportedly witnessed similar anomalies, alongside areas of Scotland also.

The theory that the scientist in me can agree with is; could this island have been a ‘Fata Morgana’? A Fata Morgana is a mirage, named after sorceress Morgan le Fay, that can be seen as a narrow band situated above the horizon. In short, this phenomenon occurs because of the bending of light rays as they pass through air layers of different temperatures resulting in distorted or inverted ‘images’. These mirages have been known to change rapidly, which could explain why island disappeared for the fishermen. This could also have been due to the fishermen leaving the area of the different air temperatures for the mirage to be ‘visible’, but I’m not going to delve into the physics of it too much, I left those days behind me in college!

Another theory bouncing around is the Legendary island of Hy-Brasil. Named after the Celtic High King of the World, Breasal, many medieval maps even had it noted off the west or south coast. Sought by Brendan the Navigator, this ‘promised land’ is said to be hidden from the human eye and only becomes visible for one day every seven years. In Ireland, this island is also speculated to possibly be the famous Tír na n’Óg. In 1674, Captain John Nisbet supposedly came across a deep fog and as they passed through it came across a shoreline shrouded in mist. They decided to explore the island and saw large black magical rabbits (I suppose the cats needed a break) and a ‘wise, grizzled’ magician. The wise man gave them gold and silver and they went on their merry way. In 1872, T.J Westropp and the O’Flaherty family claimed to have witnessed the island appear and disappear and claimed to have visited the island many times before. This was 6 years before the Ballycotton appearance though. Either someone got their dates wrong or these islands were not Hy-Brasil… If you believe the mythology of course.

Seals, dolphins and whales can be seen in the area of Ballycotton. Seals and dolphins would be too small to appear as a large island but could a whale? Reports state that the witnesses could see landscape features of the island such as a coastline and forests, so it could not have been a whale. Could this be down to Pareidolia? Pareidolia is a phenomenon where the mind perceives a familiar pattern where none exists, such as the infamous Jesus on a slice of toast or a piece of fruit that seems to be smiling back at you. If this was a whale, or as previously explained a mirage, then possibly in the residents minds it looked like an island. Just to note, Whales are only seen in this area around December and January, whereas this event happened in July.

Could this island be a ghostly apparition of Ballycotton’s underwater predecessors? The coastal erosion could have forced many other settlements back inland long before the 1800’s. No story is complete without some mention of ghosts!

No mystery is complete without our good old friends, the aliens. Yes, as always, there is a theory that Hy-Brasil has an alien link. In 1980 in Rendlesham Forest there were reported sightings of unexplained lights and is linked with UFO landings. This happened near RAF Woodbridge which was in use by the United States Air Force at the time. Sergeant Jim Penniston reportedly encountered a strange craft which communicated a binary code to him through telepathy. Decoding the binary, it reads ‘Origin 52.0942532N 13.131269W’ which is just of the south west coast of Ireland and correlates with some of the maps which depict the location of Hy-Brasil. The theory suggests that Hy-Brasil might be a sort of ‘station’ for extra-terrestrial or time travellers. Ancient aliens did an episode on this (S06, E09) suggesting that Hy-Brasil may be an extra-terrestrial base which is using a cloaking device. This is one rabbit hole I know I will go down when I have some free time to read some more. 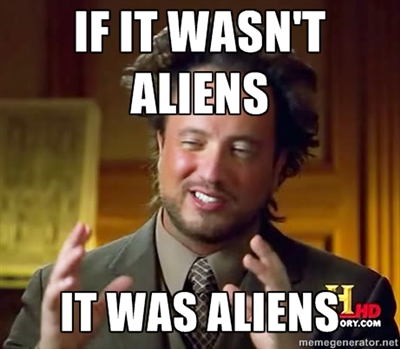 There are so many theories that can be passed around about this story, and we could be researching them all day, but then no work would be done would there?

So, what are your theories? Was this island just an explainable occurrence of a mirage, did our otherworldly friend’s cloaking device glitch or was it the fabled Land of the Young, Tír na n’Óg…..?